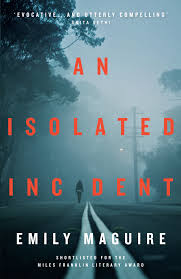 I would like to thank the publisher and the author for the advance review copy they provided me. Opinions expressed in this review are completely my own.

When 25 year old Bella Michaels is brutally murdered in the small town of Strathdee, the community is stunned and a media storm ensues. Unwillingly thrust into the eye of that storm are Bella’s beloved older sister, Chris, a barmaid at a local pub, and May Norman, a young reporter sent to the cover the story.

Chris’s ex-husband, friends and neighbours do their best to support her. But as days tick by with no arrest, her suspicions of those around her grows. And as May attempts to file daily reports, she finds herself reassessing her own principles.

An Isolated Incident is a humane and beautifully observed tale of everyday violence, the media’s obsession with the murder of a pretty young woman and the absence left in the world when someone dies.

You can order your copy of ‘An Isolated Incident’ on Amazon at:

I need to start by saying that this book turned out to be a completely different read from the one I thought I was getting. I thought I was going to read a standard crime fiction novel: woman gets murdered, mystery surrounding murder, sister attempts to follow the clues to solve the murder, murderer gets found, the end. However, this book turned out to be something totally different for the better.

Although yes, there is a murder, and yes, there is a sister who is trying to figure out what happened, the story is much more focused on the sister’s grieving process and how she copes and tries to come to terms with what has happened to someone so dear to her. I wasn’t expecting the level of emotion that the writer manages to portray into the character Chris to come through.

This book is told primarily as a narrative from Chris and the way it is written I almost felt as if Chris were telling the story directly to me. It’s like I had gone round for a cup of tea and she was recounting her tale to me and pouring out her deepest darkest secrets and I was her only listener. I really liked the way the book was written like this as straight away I felt a connection to Chris and I was invested in her and wanted to hear the story through to the end.

Chris is a troubled character, there is no doubt about that. She hasn’t led an exemplary life shall we say and has made, and continues to make, some questionable lifestyle choices. Despite Chris’s flaws I really liked her as a character. Although Bella doesn’t actually feature as a living character you can really sense the strong bond that Chris and her sister shared and feel the love Chris has for Bella.

Although this book felt at times like it was slow to get going, looking back at the book in it’s entirety I actually feel now that it was well paced and executed perfectly. Now knowing that the main story is not really about the murder after all, but more about the grieving process, the slow burning pace actually fits well with how grieving happens. It takes you gradually and consistently, day after day, leaving you exhausted and broken. I didn’t feel broken after reading this book, but I definitely found myself with a deeper understanding of how people can break down after tragedy strikes.

If anyone is or has currently suffered a loss I would probably recommend saving this book for another time. I think it could stir up some unwanted emotions in these circumstances. I can see why this book was shortlisted for the various prizes and awards detailed below and in my opinion it is well deserved. I hope this Australian author has much success here in the UK and I look forward to her next book.

EMILY MAGUIRE is the author of five novels and two non-fiction books. Her latest novel, An Isolated Incident was shortlisted for the Stella Prize, the ABIA Literary Fiction Book of the Year and the Miles Franklin Literary Award.

Emily’s articles and essays on sex, feminism, culture and literature have been published widely including in The Sydney Morning Herald, The Australian, The Observer and The Age.

Emily works as a teacher and as a mentor to young and emerging writers and is the 2018 Writer-inResidence at the Charles Perkins Centre at the University of Sydney.