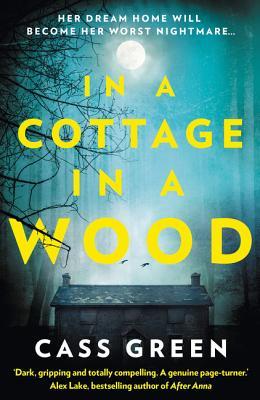 I borrowed this book from my local library.

Neve comes across a troubled woman called Isabelle on Waterloo Bridge late one night. Isabelle forces a parcel into Neve’s hands and jumps to her death in the icy Thames below.

Two weeks later, as Neve’s wreck of a life in London collapses, an unexpected lifeline falls into her lap – a charming cottage in Cornwall left to her by Isabelle, the woman on the bridge. The solution to all her problems.

But when Neve arrives, alone in the dark woods late one night, she finds a sinister-looking bungalow with bars across its windows. And her dream home quickly becomes her worst nightmare – a house hiding a twisted secret that will change her life forever…

For me this book started off a little slow, after the initial excitement when the main character Neve comes across Isabelle on the bridge, it took a while to get going. However, once Neve has made her way to the cottage things do start to ramp up and the surprise twist at the end made up for it and made me glad I had continued on.

Neve is your typical dysfunctional character, no luck in relationships, no luck in her job, strained relationships with family and friends, etc. In a way though, had she not been written this way then it probably wouldn’t make as much sense as to why she would drop everything to run off to Cornwall.

I really liked the premise of this story and I enjoyed how the author made me think it was going one particular way and then last minute swapped directions and hit me with a curve ball. Everything was wrapped up nicely and all my outstanding questions were answered by the end but the end did come rather suddenly.

Cass Green is the pseudonym of Caroline Green, an award-winning author of fiction for young people. Her first novel, Dark Ride won the Rona Young Adult Book of the Year and the Waverton Good Read Award. Cracks and Hold Your Breath garnered rave reviews and were shortlisted for eleven awards between them. She is the Writer in Residence at East Barnet School and teaches Writing for Children at City University. The Woman Next Door is her first novel for adults.