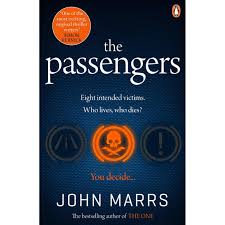 My thanks to Tracy Fenton for the invite on this blog tour and the publisher for the copy of the book provided for review. Opinions expressed in this review are completely my own.

Eight self-drive cars set on a collision course. Who lives, who dies? You decide.

When someone hacks into the systems of eight self-drive cars, their passengers are set on a fatal collision course.

The passengers are: a TV star, a pregnant young woman, a disabled war hero, an abused wife fleeing her husband, an illegal immigrant, a husband and wife – and parents of two – who are travelling in separate vehicles and a suicidal man. Now the public have to judge who should survive but are the passengers all that they first seem?

This book could not have been published at a more appropriate time. With driverless cars becoming ever more frequently discussed and AI becoming more the norm in cars, this book looks at some devastating consequences of such technology.

The thing is, although this book is fiction, in theory, there is every possibility that something like this could actually happen. We all know technology is not infallible, and that even the most robust IT security systems can be hacked, so really, would we ever be able to have a system where the manufactures could say with 100% certainty that the system was un-hackable?

The book is set in 4 parts: the first part introducing us to the eight passengers and giving a bit of their background, the second part where the hacker has taken over the cars and opens it up to the public vote via social media as to who survives, and the third and fourth parts showing what happens at 6 months and 2 years after. The author by separating the book in this way really led me through the story process from start to finish and I’m glad the 2 years later part was the finishing section as the ending is very satisfying indeed.

There are a lot of characters in this book because as well as the eight passengers there is also the jury members that along with the public are deciding the fate of the individuals in the cars. Some characters feature more than others, some characters I really detested with a passion, but one thing that all the characters shared was that they all had their own hidden secrets and weren’t quite what they made themselves out to be!

Everything about the plot of this book drew me in: the idea of driverless cars being hacked, the fact that we have no idea who or why this has happened, the thought that eight seemingly innocent people are all being driven to their death, it literally just ticked every box. I can’t wait to read more books by this author.

John Marrs is the author of #1 Best Sellers The One, The Good Samaritan, When You Disappeared, Welcome to Wherever You Are and Her Last Move. The One has been translated into 20 different languages and is to be turned into a a ten-part Netflix series in 2019.

After working as a journalist for 25-years interviewing celebrities from the world of television, film and music for national newspapers and magazines, he is now a full-time writer. His sixth book, The Passengers, is set for release in April 2019.