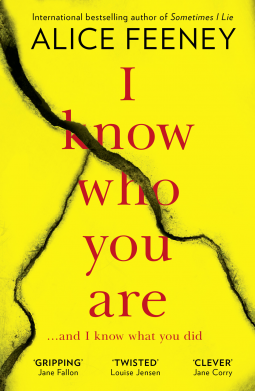 Aimee Sinclair: the actress everyone thinks they know but can’t remember where from. But I know exactly who you are. I know what you’ve done. And I am watching you.

When Aimee comes home and discovers her husband is missing, she doesn’t seem to know what to do or how to act. The police think she’s hiding something and they’re right, she is – but perhaps not what they thought. Aimee has a secret she’s never shared, and yet, she suspects that someone knows. As she struggles to keep her career and sanity intact, her past comes back to haunt her in ways more dangerous than she could have ever imagined.

This is one of those books that really is deliciously twisted in all the ways you want a psychological thriller to be. There are two story lines running parallel throughout the book but within different time periods, but how do these two stories collide? Aimee Sinclair has secrets that she doesn’t want anyone to know, but what secrets? And who is her stalker? These are just a few of the unanswered questions that will be going through your mind as you read this book.

This book kept me on my toes all the way through purely because there were just so many things left hanging which meant I had to read to the end to find out. There was a major twist at the end which completely turned me round as I did not see it coming or even have any kind of an inkling that the story would take that turn. Bravo to the author there as I haven’t read a book in a really long time where that has happened to me before.

If you like your psychological thrillers with lots of unanswered questions and an out of the blue twist at the end then this book will be for you.

Alice Feeney’s debut novel, Sometimes I Lie, was a New York Times and international bestseller. It has been translated into over twenty languages, and is being made into a TV series by Ellen DeGeneres and Warner Bros. starring Sarah Michelle Gellar. Her second novel, I Know Who You Are, is out now.

Alice has lived in London and Sydney and has now settled in the Surrey countryside. She writes in her garden shed with her dog, a giant black Labrador who is scared of feathers. She is currently editing her third thriller, which will be published in 2020.