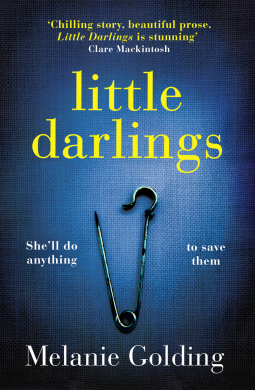 THE TWINS ARE CRYING.

THE TWINS ARE HUNGRY.

Behind the hospital curtain, someone is waiting . . .

Lauren is alone on the maternity ward with her new-born twins when a terrifying encounter in the middle of the night leaves her convinced someone is trying to steal her children. Lauren, desperate with fear, locks herself and her sons in the bathroom until the police arrive to investigate.

When DS Joanna Harper picks up the list of overnight incidents that have been reported, she expects the usual calls from drunks and wrong numbers. But then a report of an attempted abduction catches her eye. The only thing is that it was flagged as a false alarm just fifteen minutes later.

Harper’s superior officer tells her there’s no case here, but Harper can’t let it go so she visits the hospital anyway. There’s nothing on the CCTV. No one believes this woman was ever there. And yet, Lauren claims that she keeps seeing the woman and that her babies are in danger, and soon Harper is sucked into Lauren’s spiral of fear. But how far will they go to save children who may not even be in danger?

Ooooooo what a chilling read! Lauren is a new mother who is convinced her new born twin babies have been taken by evil fairies and replaced with identical babies that are not hers.

The whole way through reading this book I was never entirely sure whether Lauren’s babies actually had been swapped or whether she was suffering from a severe case of postpartum depression. I desperately wanted to believe that Lauren wouldn’t do anything to hurt her children but her theory that her children had been abducted by fairies just seemed too ludicrous to believe. It seemed every chapter I read I kept changing my mind as to whether I believed her version or not.

I really felt for Lauren because I can only imagine that dealing with life as a new mother is hard enough with one baby let alone two all at once. I really felt her desperation and hopelessness seeping through the pages and I was so grateful that she had someone on her side.

DS Harper seems to be the only one to take Lauren’s claims seriously that her children have been abducted. Despite pushback from her superior officer she continues to investigate the case, often going way above and beyond what a typical officer would do in her situation and thank god she does because otherwise poor Lauren would been entirely on her own.

There is very much a mystical paranormal side to this story and the amount of old wives tales surrounding babies and especially twins is really interesting. The ending for me worked really well because it’s kind of left on a cliff hanger, but not one where I felt the book was unfinished and not one that necessarily needs a follow up. Some books that end with unanswered questions can be really frustrating but I didn’t feel that with this book.

There’s so much more I could say about this book but you really need to read it for yourself. This is a very solid psychological thriller read and one I wouldn’t hesitate to recommend.

Melanie Golding has been employed in many occupations including farm hand, factory worker, childminder and music teacher. Throughout all this, because and in spite of it, there was always the writing.

Her first novel, Little Darlings, was published by HQ in the UK in May 2019, and by HarperCollins Canada and Crooked Lane Books US. Little Darlings has been optioned for screen by Free Range Films, the team behind the adaptation of My Cousin Rachel.